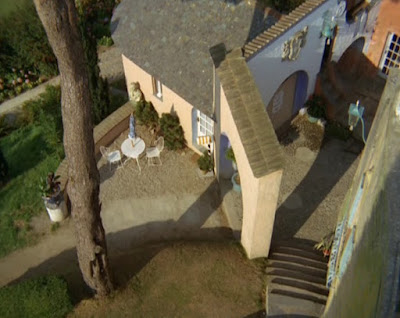 An aerial view from the Bell Tower of 6 Private {the Round House in Portmeirion terms} in which one thing stands out, the hardboard covering in the arch, upon which is a notice about the filming of ‘the Prisoner’ in Portmeirion. However by the time the Prisoner returns to his cottage, having seen a maid flicking a yellow duster from on the balcony, both the hardboard and the notice have gone! 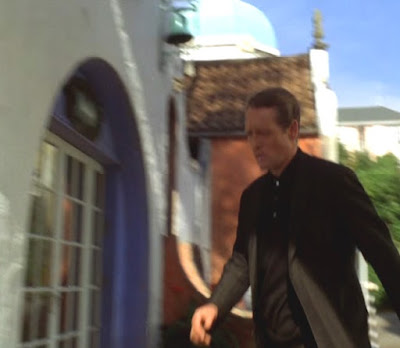 The hardboard has suddenly been replaced by a pair of French doors! Whichever way you look at it, they are quick workers in The Village to have fitted those French doors so quickly. Either that or the hardboard was covering the French doors in the first place, if that’s the case why? But of course those French doors are not reflected in the set of Number 6’s cottage back at MGM film studios, because they are not there in his London home. It would have been better all round had the hardboard been painted white, at least then it would have blended in with the arch. As it is the French door makes a mockery of the whole thing, as it’s not there when the Prisoner goes into his cottage!