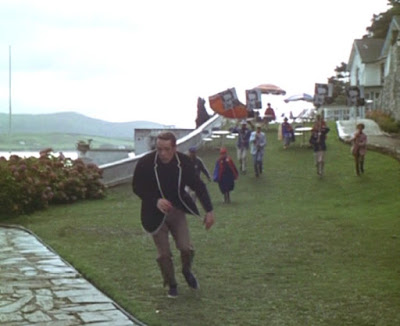 It doesn’t matter where No.6 goes, there are always fans ready to pursue him, even back in the early eighties when fans of ‘the Prisoner’ came together for the first time in The Village. No.6 didn’t know this was about to happen, and on one occasion when he attempted to escape, he found himself incommoded whichever way he turned! In the end he had to overpower two boatmen in order to escape the clutches of his adoring fans. And yet they loved every minute of it, chasing No.6 from pillar to post. In fact the longer No.6 was able to elude his pursuers they more they enjoyed it, seen here chasing No.6 while holding placards chanting “Six, six, six, six, six, six!” It wasn’t until it was time for those enthusiasts to leave The Village that No.6 could begin to relax again, The Village returning to normal life!