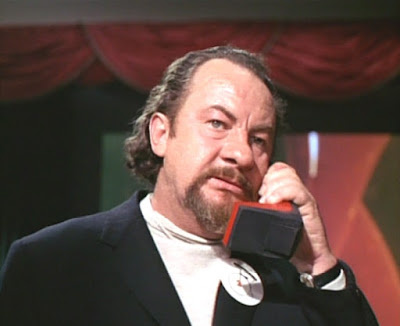 “And you can remove that thing too, I’m not an inmate…….. you can say what you like, You brought me back here, I told you the last time you were using the wrong approach, I do it my way or you find somebody else!”
“How many times do I have to ask?
“Degree Absolute, I require approval. If you think he’s that important there’s certainly no alternative…………….you must risk either one of us. I am a good man, I was a good man, but if you get him he will be better, and there’s no other way, I repeat no other way! Degree Absolute tonight please…… a week? That’s not long enough……..you don’t want to damage him! Very well……tonight!”

Judging by how Number 2 says “Very well……tonight!” he knows exactly what having to take that decision about Degree Absolute means! This Number 2 is the only one who has ever really stood up to Number 1, the way he gave so much back chat, almost to the point of defiance, as well as making a demand. But then he wasn’t at all happy finding himself back in The Village. One or two of his predecessors have made slight protests. Another once tried to explain why Plan Division Q had fallen behind, expecting sympathy and understanding, he received neither! The way this current Number 2 had spoken to Number 1, it’s a wonder he wasn’t dropped on from a great height. But then Number 1 restricted Degree Absolute to a week, which ensured Number 2 was put under extreme pressure to succeed right from the start. Perhaps he wouldn’t, perhaps Number 6 would be the one to walk out of the Embryo Room alive, which proved to be the case, his reward of course an interview with Number 1. And Number 2’s reward, well he became a changed man, certainly in appearance. In fact out of the three, Number 6 was the only one to remain as he was. Number 48 was once with The Village administration, but then he went and gone. And Number 2, well as I’ve said, a changed man!