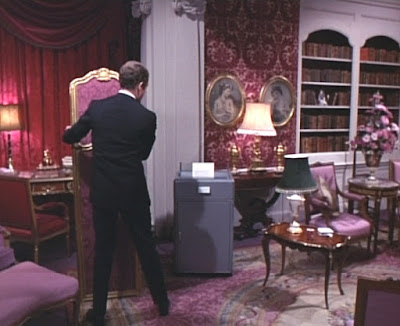 In ‘Dance of The Dead’ when the pair of doors open automatically for Number 6, he steps into the room, the light come on, and the doors close behind him. He stands there looking about the room, then his eyes finally fix on the screen, he steps forward with purpose. There’s a noise in the room, then Number 6 pulls the screen to one side to reveal………a teleprinter! I recall the anticipation which welled up inside me as Number 6 was about to whip aside that screen. Who was behind the screen? Would it be Number 1? It couldn’t be Number 2 she was back at the Ball. And then the screen is whipped to one side to reveal a teleprinter! Not what I was expecting at all, I remember feeling let down. But perhaps the words being printed out on the paper would be revealed. No chance, further disappointment. And then Number 6 uses some good old fashioned brute force on the machine, by ripping out both wiring and paper. At least he was able to stop the machine. But wait, no, the teleprinter suddenly whirrs back into life and resumes printing the incoming message or instruction!
It wasn’t until many years later that I wondered why the need for the teleprinter? Yes so that Number 2 could send her reports, and in turn receive instructions, but from whom? After all at the outset of the episode Number 2 is supposedly speaking to Number 1 on the telephone, which makes the teleprinter superfluous. Unless the reports Number 2 sends, and the instructions she receives are to and from masters at a location well beyond the confines of the Village!