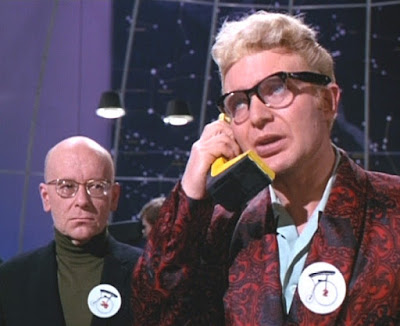 It’s an interim No.2 speaking to No.1, who telephoned him asking why there has been a delay with Plan Division Q? No.2 explains to No.1 about No.50’s hesitancy in going to No.6. That she took a long time making up her mind to go and see him. No.2 had hoped to catch up, but No.6 flatly refused to have anything to do with her, and that caused another delay……. Perhaps it would be better to replace No.6 with someone more attractable, less suspicious. But the reason they selected No.6 was a matter of credibility without which, the plan might back-fire!
So why is this interim No.2 speaking to No.1 on the yellow telephone, when it more usual and proper to use a red telephone? Mind you he’s not the first No.2 to make that mistake. But then the mistake isn’t his, it’s the Supervisor’s. But then it’s not really a mistake, seeing as the yellow telephone is the only one on the control consol!
And why isn’t this No.2 using that ridiculous over-sized red curved prop of a telephone? I would have thought it would have suited him. Certainly if it was ridiculous enough for Colin Gordon and Patrick Cargill, it would have been ridiculous enough for Derren Nesbitt to have used! Mind you that ridiculous looking prop would have had to have been used by Peter Swanwick first, and that might have made the difference in this instance!