A Favourite Scene In The Girl Who Was Death 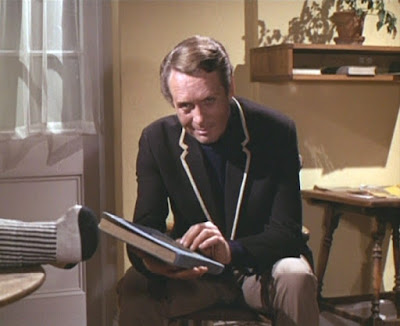 There is no end to Number 6’s talents, but since when had he become a child minder, and whose children was he minding? One can only hazard a guess as to whether this was a one-off, or how many previous times Number 6 had sat there telling the three children his stories. But he did promise the children that he would return the next evening, as he didn’t think he had any other important appointments. Whether he did or not is unknown, but since he knew that Number 2 had been watching all along, it no longer mattered whether he did or whether he didn’t. But no doubt a family was engaged to get Number 6 to child mind for them, under the guidance of Number 2. But why Number 6 should take on such a task we don’t know. Although he has been known to be of assistance to people from time to time, just ask Alison-Number 24 of ‘The Schizoid Man.’ Perhaps he saw it as a harmless occupation, and he might have liked children!