A Favourite Scene In Dance of The Dead 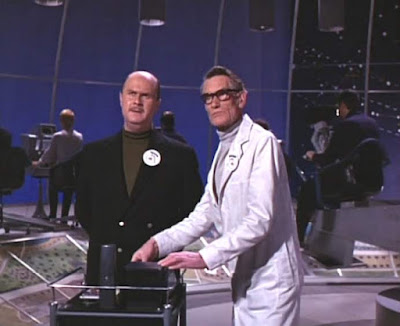 The doctor-Number 40 is watching the wall screen in the Control Room. On the screen a doctor, who bears a similarity to Number 40, a nurse, and male orderly has entered 6 Private. Number 6 is asleep in bed, and the doctor checks the mug on the bedside table to make sure the patient has actually drunk his drugged nightcap.
“Shouldn’t you be doing this in the hospital?” the Supervisor asks.
“I know what I’m doing.”
“What about Number Two, has it been agreed?”
“I’ll take the responsibility, if we wait for orders we’ll never get results!”
“I hope you do know what you’re doing.”
All this time the doctor and nurse have been preparing the patient for the experiment, who suddenly wakes up and waves his arms in front of his face!
“They always do that don’t worry, he’ll be alright in a moment.”
“You know the instructions about Number Six, if any damage is done to him…..”
“He’ll talk before that happens.”
On the screen Number 6 seems to be adjusting to the treatment.
“Ah it’s going to work, I knew it would.”
The doctor picks up a telephone, puts it into Dutton’s hand, and presses a button. The bedside table telephone in 6 Private begins to bleep, Number 6 picks up the receiver.
“It’s a bore old man” says Dutton “the committee, they want a breakdown on everything you know. You me, Arthur, the Colonel, everybody, suspected security leak apparently, all the files you’ve seen, the projects you know about just headings not details. This phone is scrambled I’ve got a recorder. Might as well tell me now.
“You…you must not ask me that.”
“I’m not, it’s the committee that’s asking” the doctor tells Dutton.
“I’m not, it’s the committee that’s asking.”
“……Who is that….who….is that, who is that?”
“It’s Dutton, hello, hello are you there?” The doctor tells Dutton.
“It’s Dutton, hello, hello are you there?”
“You must stop you’ll damage the brain, then we’ll all be….” the Supervisor urges.
On the wall screen Number 6 is seen to collapse back on the bed, as Number 2 enters the Control Room.
“Stop! Get that man back to the hospital.”
“Number Six was about to talk!” protests the doctor.”
“Don’t you believe it, he’d have died first. You can’t force it out of this man, and he’s not like the others.”
“I would have made him talk….everyman has his breaking point.”
“I don’t want him broken, he must be won over. It may seem a long process to your practical mind, but this man has a future with us. There are other ways.”
The doctor conducted his experiment concerning Number 6 from the Control Room because he needed the use of the wall screen. I suppose he could have used Number 2’s office, but he was acting without orders, without Number 2’s permission! He said “Ah it’s going to work, I knew it would” using Dutton as a communications medium. Well it didn’t work, Number 6 isn’t like the others. I wonder how it felt for the doctor to experience failure, well not quite failure, but to be stopped dead in his tracks whilst in the middle of an experiment.
Arthur and the Colonel, might they not be like Fotheringay and the Colonel, not forgetting Thorpe and Colonel James. And we’ve heard of Arthur before, Mrs. Butterworth’s late {or supposed} husband who was a Naval man. And British Naval officers were often recruited into British Military Intelligence.
Why the doctor only wanted headings and no details of the files Number 6 had seen, the projects he knows about I don’t know. Perhaps that would have been the start. If Number 6 will answer one simple question, all the rest will follow. But that’s already been tried a couple of times already. But then again there’s never been anyone like the doctor who would stop at nothing in order to gain information. Just look at what his experiments had done to Dutton!
Then Number 2 stepped in just in time, and put an end to the doctor’s latest experiment. She told him “Don’t you believe it, he’d have died first. You can’t force it out of this man, and he’s not like the others.” The doctor said he would have made him talk, well he wouldn’t because Number 6 isn’t like the others! Number 2 also told him “This man has a future with us.” Did Number 2 figure that out all by herself, or did those “masters” on the other end of the teleprinter send her an instruction advising that that is the case, although it could have been Number 1. Either way, we now know that Number 6 is not expendable………unlike Roland Walter Dutton!


Be seeing you
Posted by David Stimpson at 07:03