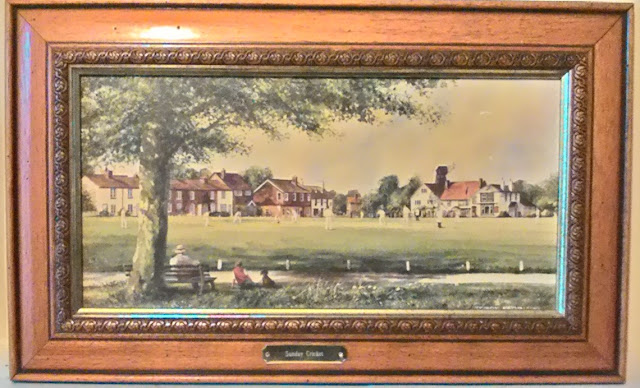 On Wednesday January 31st, having posted The Tally Ho mailings, I left the Post Office and standing at the kerb of the pavement I waited to cross the road. Suddenly something in the window of the Squirrel Emporium, selling antique and vintage items,  caught my attention. For a moment I could not believe my eyes at what had caught my attention, but they were certainly wide open! Crossing the road I saw the above picture, called “Sunday Cricket” in the bottom left-hand corner of window. To my disappointment the emporium was closed on Wednesdays! So I hurried home, collected my tablet device, and returned through a hailstorm to the emporium in order to take a photograph of the picture. Thankfully the hailstorm had ceased by the time I arrived back at the Squirrel emporium, the problem now was the sun shining right into the window which made it very difficult to take a clear picture without the addition of my reflection being added! I could not see a price tag, however the contact details for the proprietor of the emporium were posted on the shop door. I was going to write down the contact details, but I forgot pen and notebook. But thankfully I had my tablet with me! Upon returning home I emailed the proprietor asking what price she had on the picture. Morag and I imagined that it would be out of our price range.   The next morning when I checked emails there was one from the proprietor of the emporium, the price of the picture a mere £18. Later that morning I returned to the Squirrel emporium and purchased the picture. I was told by the owner of the emporium that the picture was a print, but that didn’t matter to me. However I had my doubts about that, because I noticed a small scratch on the picture. The lady owner of the emporium asked me why I wanted the picture? So I explained to her what the view of the picture was, of Mopham cricket pitch with the Cricketers Inn and windmill in the background. Then told her what the picture meant to me, that a similar scene appears in ‘the Prisoner-The Girl Who Was Death’ 1960’s television series. 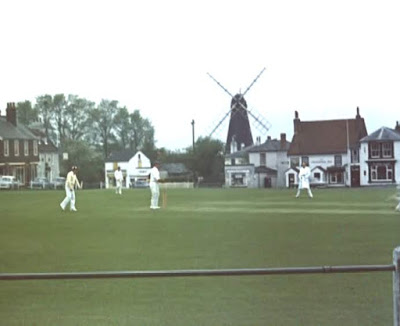 The lady seemed a little bemused {I don’t think he had heard of the Prisoner}but I duly parted with my £18 and happily made my way home. A closer study of the picture, by the artist Terry Harrison, showed that it is not a print but a painting, the scratch in the upper right-hand corner proved that much. Whereas a print is smooth, this picture has texture to it. I logged onto the internet and carried out some research into the picture. Yes there are a number of prints of the painting available priced at £16 or £18, but they are not framed nor complete with a brass plaque. So the crux of the matter is, I have inadvertently purchased the original painting of “Sunday Cricket” by watercolour artist Terry Harrison. A fine addition to my Prisoner collection/archive.