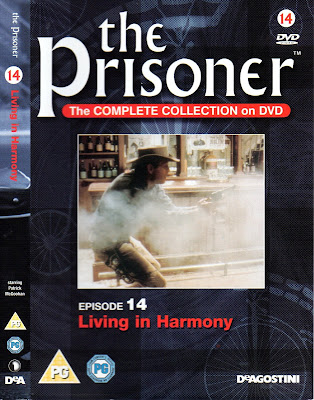 Whilst out shopping yesterday morning, my wife and I did our regular tour around the local charity shops. And in Oxfam, amongst the ’s on the shelves I espied ‘Living In Harmony’ along with five or six other episodes of the De’ Agostini collection. This is only the second time I have seen this episode from this collection, so I could not resist purchasing the item.


Also amongst the ’s was 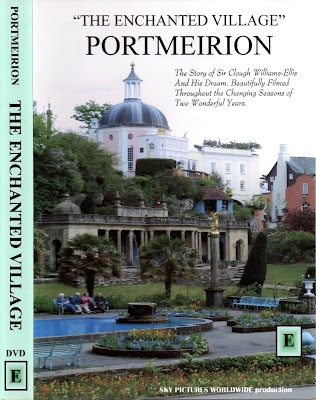 I have a copy of the original VHS video, but this is the first time I had seen the , it now resides within my collection. It contains film footage of the 1995 Prisoner Convention, and pictured here, I am being 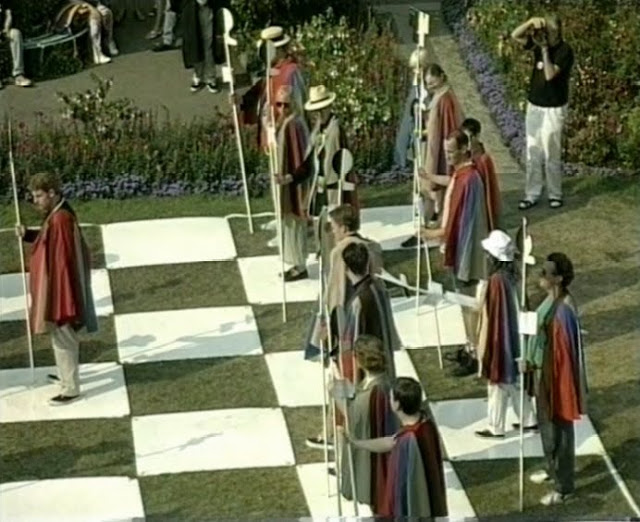 urged by my wife to make the move pawn to Queen 4.
My wife and I enjoyed watching ‘Portmeirion The Enchanted Village’ again, because its now archive film footage of Portmeirion, and the way we like to remember the Italianate village, before the place began to change. I was privileged to have been able to portray the character of Number 6 just at the right age being in my late 30’s. Oh yes, and the gentleman standing alone, the white Queen’s Bishop’s pawn, is Tony B. Each year since 1994 he always asked me to reserve that square so that he could stand next to me on the chessboard. And it was always a pleasure to do that for him. You wouldn’t think anyone would wish to reserve such a square a year in advance, but it was important to him. Well as it happens there was always a rush of people to grab a chess pole and take up their positions on the board. So much so that one year there wasn’t even room for me, I found a 6 impersonator standing on the Queen’s pawn’s square, and also a man standing on my wife’s white Queen’s square complete with pole! I had to politely ask him to relinquish the chess pole and stand to one side as co-organizer of the human chess match. But my wife had quite a tussle {verbally} to get this chap to understand he couldn’t be the Queen. Those were the days, happy days, as many can attest to. I wonder if such a rush for places on the chessboard happens today at Prisoner Conventions? Somehow me’ thinks not.

Be seeing you soon.
Posted by David Stimpson at 08:42