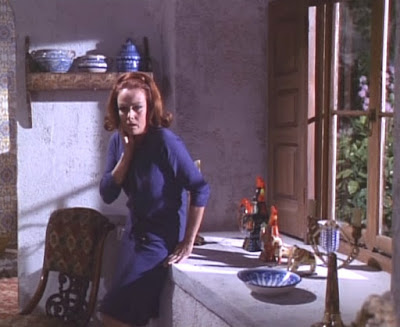 Don’t be alarmed, you’re safe home, and amongst friends. But of course you already know that don’t you, so there’s really no need to play games with me! I’m quite sure they briefed you on The Village, so you are simply playing at being shocked for the benefit of those who are watching. I’m also sure you are a good field agent, otherwise they would not have sent you here. However there is one thing about you which is something of a puzzlement. Are you working for British Intelligence or the Russians, or were you once in The Village before, as a prisoner, and now co-operating with the Villages administration as an agent working for them in an act of mutual co-operation? Do you know the Colonel and Fotheringay? You see I have a problem, I don’t know which side you are on, unless there is only the one side, The Village!
Number 2 said you were brought here for recuperation, but you told Number 6 all you did was resign. You know you people should really get your story straight. So which is it? Of course it’s neither of them! You are a very beautiful lady spy, but we’ll soon see how good you are when faced with an unspeakable horror that is the Guardian. I’m curious, you muttered something to yourself when you were in Number 6’s cottage, what was it now? Oh yes, you didn’t think it would be like this? Did you mean The Village, you didn’t expect it to be like this, what did you expect it to be like, a Soviet Gulag?! Never mind, you’re alright, Number 2 won’t let any harm come to you, he can’t afford to.
You did your job, you were the first woman to get close to Number 6, but only because he thought you had something he wanted to know, the location of The Village. He was certainly blind to you, he never once wondered how it was possible for you to be able to contact Karel, when you were in The Village. They made you a damsel in distress, and that’s one chink in Number 6’s armour, he cannot resist a lady in distress. Had it not been for one tiny detail. But I expect the result would have been the same, had Number 6 been wearing his own wristwatch. As both Post 5 and Number 6’s wristwatch would have been set at the same time, Greenwich meantime!
Just one more thing, you were going to stress in your report that Number 2 did his best. To whom were you going to give that report? Not the Colonel obviously, he already knew that the plan had failed. So someone else, someone higher up, Number 1? No, I cannot see someone like you reporting to Number 1. So it had to be someone, or some organisation outside The Village. But British or Russian? Perhaps those new masters Cobb talked about as he was leaving The Village!

Be seeing you
Posted by David Stimpson at 07:05