A Favourite Scene During The Chimes of Big Ben 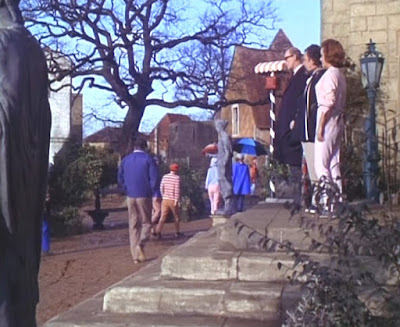 After Number 6 emerges, from what he thought was an office he knew very well in London, only to find he’s still in The Village. He sees Fotheringay, Number 2, and the woman Nadia standing outside the Recreation Hall, and walks over to them. He looks up and says nothing. They look down on him as he looks up at them and simply gives the salute and says “Be seeing you,” then walks away. I’m always impressed by the way Number 6 takes this defeat in his stride, but then perhaps he can see that any protest either physical or verbal would be a waste of effort. Besides it would get him precisely nowhere, he probably wouldn’t want to give them the satisfaction. Yes he has been betrayed, but Number 6 only had himself to blame, so gullible as to believe Number 8 knew the location of The Village. He didn’t even question her on how she had been able to contact Karel when she was a prisoner in The Village! But Number 6 has learned a hard lesson, he now knows who has put him in The Village, seeing as he’s been betrayed by his own people, the Colonel and Fotheringay. So he can no longer depend upon help from that quarter, which leaves Number 6 completely on his own, without a friend or anyone he can place his trust in!

Be seeing you
Posted by David Stimpson at 07:16