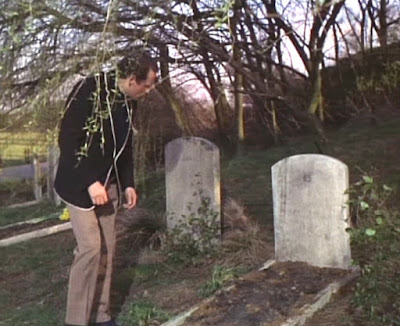 Why did Number 6 choose the number 113 from that gravestone, when the grave of Number 141 is much older? Even though Number 113’s grave looks to be too fresh seeing as she died only a month ago. Number 141’s grave looks much older, and over grown. Perhaps it was to keep the number in the series. Before Number 113 was an old woman in a wheelchair, it was the reporter for The Tally Ho, and later TV cameraman in ‘Free For All. I take it you spotted that? Number 113 being the reporter for the broadsheet, while Number 113b was the photographer. But later they changed roles, Number 113b the reporter with a microphone and a tape recorder, and Number 113 with a strange looking TV camera! I wonder why the change, perhaps they had both been promoted, it certainly looks to be a step up the ladder for the both of them.