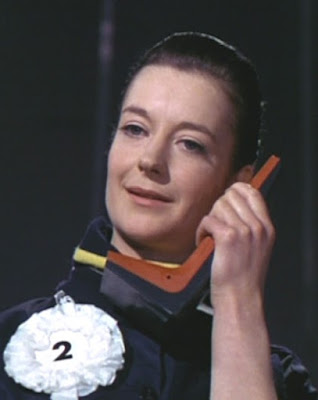 Sometimes I think that what the viewer does not see in ‘the Prisoner’ is as intriguing as that which we do see. Take for example this new Number 2, she turned from likeable character of Number 58, who spoke some incomprehensible language, to No.2 a ruthless, nasty piece of work who spoke perfect English without any form of accent whatsoever.
I would have liked to see this Number 2 carry on in the following episode, to see how she would have handled ‘The Schizoid Man.’
However on the other hand, having taken up office as the new Number 2, she must have served some term of office in the village. I cannot think for one moment that this No.2 was brought to The Village simply to aid the out-going No.2, and then only take up office so that she could slap No.6 around................. Will you never learn...this is only the beginning... We have many ways and means but we do not wish to damage you permanently... Are you ready to talk?
I hate to imagine what this new Number 2 might have had in store for Number 6, the day after ‘Free For All.’ A more severe looking Number 2 I have never seen. She looks as though she could do some real harm to you, and have it done with a smile on her face!

Be seeing you
Posted by David Stimpson at 07:14