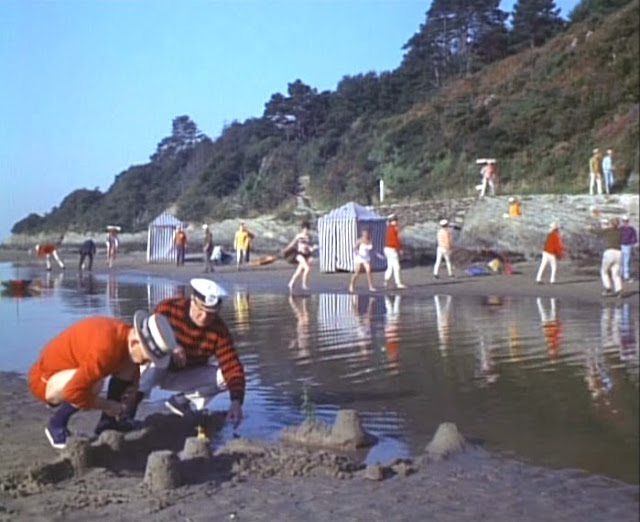 Admiral “Now then this is how it was. The sea port was heavily fortified,”
“Is this an exact replica of the port?”
“Not exactly, there are no German gun emplacements.”
“What about the U Boat pens?”
“No, there are no U Boat pens. But there are towers, and where you are is the dry dock.”
“Should we add U Boat pens to the model?”
“No the U Boat pens aren’t important. It’s the gates to dry dock we we’re going to blow up.”
“There aren’t any dry dock gates!”
“No.”
“That’s because the mission was successful!”
“We haven’t blown them up yet.”
“Ah!”
“Now I was here on the bridge of HMS Tunbridge Wells with only a complement of a skeleton crew, we were crossing the Channel undercover of darkness.”
“It was a suicide mission!”
“We were to ram the gates of the dry dock, there were five hundred tons of high explosive aboard the ship. We had to ram the gates and the ship would blow up taking the gates with it. I’ll demonstrate.”
“The plastic boat is HMS Tunbridge Wells.”
“Yes.”
“But why?”
“Because I haven’t got a plastic model of a destroyer!”
“No, I mean why did you have to blow these gates up?”
“Because this dry dock was the only one large enough outside German ports, able to take a pocket battleship.”
The Admiral demonstrates the attack using the plastic boat.
“We were flying under German colours to try and fool them. But they must have realized something was wrong and they opened up with their heavy machine guns and then the eighteen pounders. We were hit several times, but it didn’t stop the ship from ramming the gates of the dry dock. The ship was wedged, but the explosive didn’t detonate!”
“What did you do?”
“Shells were exploding all around. The ship was on fire and could have blown up at any moment. So I got my men off and ran for it. We took out a couple of sentries, took their weapons and managed to steal a rowing boat. We had just about got out of the harbour when the ship blew up taking the gates with it. Then we rowed out into the English Channel, and as luck would have it we were picked up by a German patrol boat and the crew took us back into the harbour. We were interrogated, then put into a prisoner of War Camp.”
“What a fantastic story.”
“I’ll tell you another one, how me and fifteen others escaped that camp. Stalag Luft 23 was situated a few miles from a river, and an idea struck me, that if a group of use could build a boat, we might make it out to sea. So we decided to start a modelling club, making model yachts and ships out of bits of wood, this was to put the guards to sleep so they wouldn’t realize what we were really up to. Then one day Tommy Day hit on the idea of making a model of a destroyer, but full-size, I tell you we had to come up with a first rate plan with which to fool the guards to what we were doing! Well one day after the steal and two twin diesel engines had arrived.............”

Be seeing you
Posted by David Stimpson at 07:04