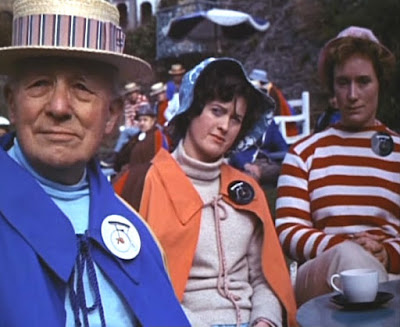 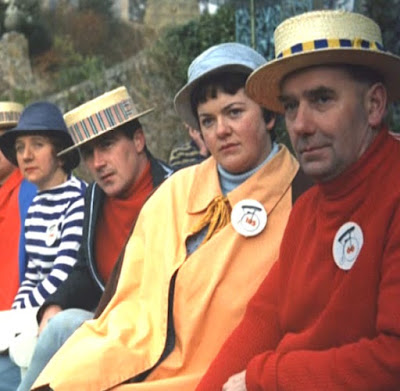 Who are these people? They are the citizens and citzenesses of The Village. During any free election you have two banks of electorate, they vote one way or the other, in this case they either vote for Number 2 of the old regime, or they are brave enough to stand firm on this electoral platform and speak a word, that word is freedom. In that they will vote for Number 6. And then there are the other voters, the so called “Don’t knows,” they are the citizens pictured here from ‘Free For All.’ They have yet to make up their minds about the two candidates, how do we know this? None of them are wearing rosettes thereby declaring their allegiance to either candidate.
Confession by coercion? Well they all look old enough to have gone through that stage long ago, and now probably reside in the Old People’s Home. That means they are “lifers,” to be looked after for as long as they live, and will probably live long enough so to be a drain on The Village welfare system! On the other hand Number 6’s promises may ring richly in their ears, but what would they do with their freedom if they got it? And they certainly some look too old for those hazardous sports Number 6 insisted they could and will take part in. As for all those conceivable amenities which Number 6 said he could supply, these good people have been enjoying them for years and years, so there’s no need to apply to Number 6 who says he can make it easier and better. That’s as maybe, but better for whom? That’s what the electorate wants to know!