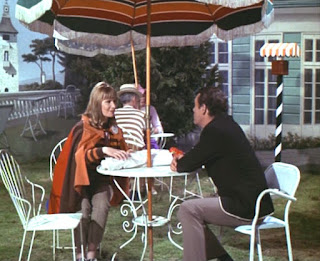 What was it Number 6 said in ‘A B and C’ whilst looking into a camera? Oh yes, “Be seeing you” and he gave that casual salute of his. This while Number 2 was watching Number 6 on the wall screen in his office, “No” said Number 2 “I’ll be seeing you.” But Number 2 doesn’t spend all his time spying on Number 6, no, he has Observers to do that for him. It’s just a pity they were not watching that time Number 6 followed Number 14 from her cottage, through The Village, and into the woods to the secret laboratory!
When I watch that scene, I always have the feeling that Number 14 knows she is being followed by Number 6. That she deliberately leads him through The Village, through the woods to the laboratory so that he can break in to discover what she and Number 2 are doing to him. Through the film of Engadine’s party, the three box files, and above all the third dose of the drug which he is able to dilute. I’ve often thought why didn’t the doctor notice that the third dose of the drug was lighter in colour? Because it must have been after Number 6 had diluted it with water. But then perhaps she had, and realized what Number 6 had done, but purposely made no comment, after all Number 2 wouldn’t have noticed.
Another occasion when the Observers might have been watching Number 6 was at night, when after the housemaid had made Number 6 his nightcap of hot chocolate and had departed the cottage, they would have seen Number 6 tip that nightcap into the sink. Then to take a glass he fills with tap water, and takes a sip. But then again perhaps an Observer had been watching, and he or she might have quietly smiled to him or herself, because it didn’t matter that Number 6 had poured his nightcap into the sink. Because the drug was in the tap water anyway! See, Number 6 has passed out, and is lying on the floor! 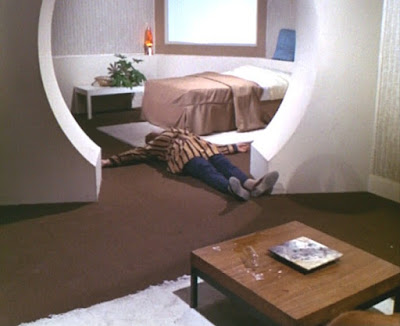