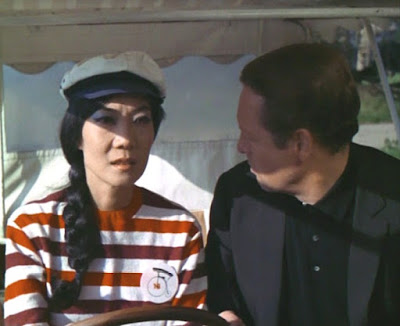 This is Barbara Yu Ling as Number 18, a taxi driver who is asked to take her fare to the nearest town. But the taxi service is only local, so the Prisoner asks her to take him as far as she can. Being only a local service Number 18 takes her fare on a tour of The Village via the scenic route. However by the end of the tour the taxi driver is still Number 18, but for some reason she has had a change of badge! 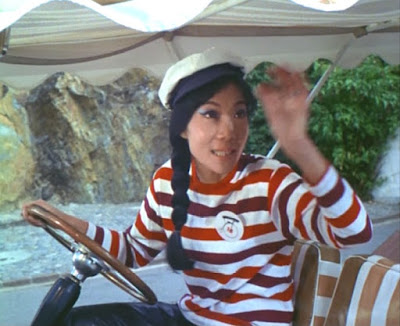 The question is, why should a change in badge be required at all? Even if the badge had fallen off Barbara Yu Ling’s jersey it would still be in the taxi! It’s rather like Denis Shaw who plays the shopkeeper in the next scene. He starts of as Number 19, but by the end of the scene he’s had a change in badge and is Number 56! But in Barbra Yu Ling’s case at least continuity got the number right, if not the Penny Farthing!