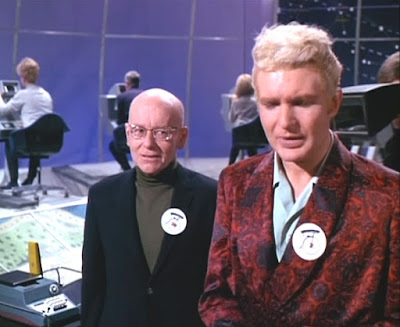 “You shouldn’t come in here dressed like that you know.”
“Yes I know.”
“It’s bad for discipline.”
“Yes I know that.”
“Then why do it?”
“You know how much pressure I’m under.”
“The last Number Two who went about in his pyjamas and dressing gown didn’t last too long after that.”
“What happened to him?”
“Well he’s not here is he, you are.”
“You know if I didn’t know better I’d say you were enjoying this!”
“What me?”
“It’s not me its I, it’s only me when it’s in the predicament.”
“And you’re in one of those alright!”
“Alright don’t rub it in.”
“Why do you think I’ve never gone for promotion, because I’m second to you, and I’ll still be here when you’re not.”
“You’re a little ray of sunshine and no mistake.”
“Well how do you think you’re going to get out of this one?”
“It wasn’t my mistake.”
“There’ll be the very devil to pay.”
“It wasn’t my fault.”
“What made you think it was such a good idea in the first place?”
“I only did it for a bet.”
“Yes, and now you’re stuck with it.”
“Don’t I know it!”
“Go on, show it to me.”
“What here?”
“I could do with a laugh.”
“Not in front of this lot, you know what they’re like.”
“Remind me again, what does it say?”
“I heart Alan Tracy. There, satisfied?”
“Number One has placed a Thunderbird puppet in charge of The Village!”
“I’ll call International Rescue, they’ll soon get me out of here.”
“Go on then, I’d like to see how they’re going to do that. I expect Jeff Tracy to go to any lengths to rescue one of his sons. I’ll get the helicopter to clear the landing pad!”
“What for?”
“The arrival of Thunderbird one.”
“Why not Thunderbird four?”
“The tides out!”