A Favourite Scene In Hammer Into Anvil 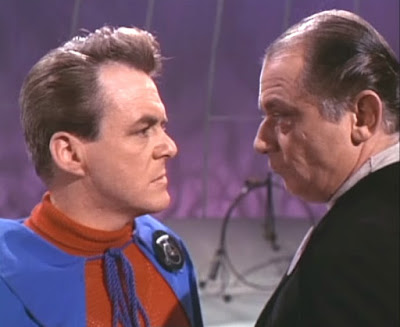 When Number 2 is interviewing the leader of the Brass Band, all Number 6 did was ask him to play the Farandole from the L’arlesienne suite and Number 2 had the Band leader hauled in for interrogation!
“A request you say?”
“Yes sir. That's all, he asked me to play the Farandole from L'Arlesienne suite.”
“What else?”
“I don't understand sir.”
“What else did he say?”
“Nothing sir.”
“Nothing! Number Six just asked you to play a tune... and then walked away.”
“Did he sir? I didn't notice.”
“Does that make any sense to you?”
“No sir.”
“No, it doesn't, does it. I'll ask you once again... did Number Six say anything else.... about me for example?”
“About you sir?”
“Well did he?”
“No sir.”
“Perhaps you've forgotten. Try to remember!”
“He didn't sir.”
“You're lying aren't you? There's something going on!”
“I don't know what you mean sir.”
“I don't know what you mean sir. I'm as much in the dark as you are. You're all lying! Its a plot! Going behind my back. Who do they think they're dealing with? Pigmies!”
Number 2 didn’t believe him, he was sure Number 6 had said something else to him, but of course he hadn’t. Number 202 was merely unwittingly used in one of Number 6’s little jamming activities against Number 2, and he fell for it! But in the end Number 2 did finally realize that the Band leader didn’t know what Number 2 was talking about and let him go. Number 2 doesn’t have a very high opinion of the citizens, he called them pigmies. I suppose he looks upon the citizens of The Village as small insignificant people, personally I’ve always seen that as an insult to the Pigmy people who are anything but insignificant.