What’s That Prisoner Been Up To? 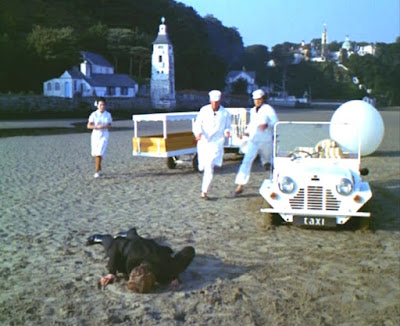 “What’s happened?”
“Looks like there’s been an accident.”
“What happened?”
“Looks like this chap’s run himself over!”
“Run himself over, how did he manage that?”
“I don’t know, I’m not a forensic crime scene examiner!”
“Well there’s no-one else here, he must have been driving that Mini-Moke.”
“And he used it to drive over himself?!”
“He must have jumped out.”
“Why would he do that?”
“Perhaps he was trying to commit suicide!”
“What, by driving over himself?”
“It’s not possible is it?”
“I can think of easier ways of to commit suicide.”
“Shall we try it?”
“Try what?”
“If we were the forensic investigation team we could restage the incident.”
“What by one of us trying to run over ourselves?”
“Yes.”
“Don’t be ridiculous!”
“Oh look, he’s coming round, best give him an injection. He’s had a very nasty experience.”
“He’ll have another one when he finds he’s still alive!”
“You know I think that airbag saved his life!”
“It might be suggested that the airbag could be fitted inside the vehicles!”

Be seeing you
Posted by David Stimpson at 07:14