Doing As The Cave Man Did! 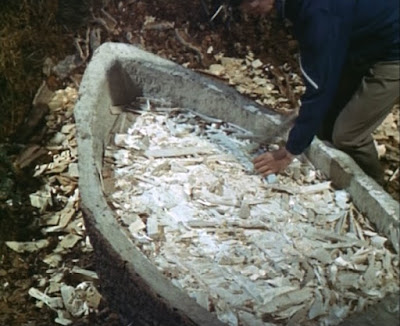 That’s a very odd coloured wood, it looks more like concrete!
Number 6 made his own tools, seeing as basically abstract art is primitive. Stone axe, chisels this is hardly doing as the caveman did as suggested by Number 2. Stone age man used proper cutting tools made from flint. When Number 6 is felling that tree during ‘The Chimes of Big Ben,’ I’ve gone through that piece of film frame by frame and I cannot see where a metal axe {as opposed to the stone axe} is used to make those cuts in the tree trunk! Even though Number 6 had been using a stone axe which he apparently was, there’s no proper cutting edge to it, its blunt! But never the less Number 6 used the axe to fell a tree, to cut away the branches and bark, and then the stone chisels to hollow out the trunk of the tree to fashion the hull of a boat. Not to mention the mast and crosspiece, as well as the abstract bottom of the boat. Boat did I say, Number 6’s coracle was flat bottomed, it would not have behaved well at sea, having no keel. What’s more the bottom of the boat had holes in it. The tarpaulin which was used to wrap the hull of the boat, and give support to the bottom, would have been soaked with sea water, making Number 6’s craft most unseaworthy. 30 miles along the coat, I’d have been surprised if it made 30 feet!