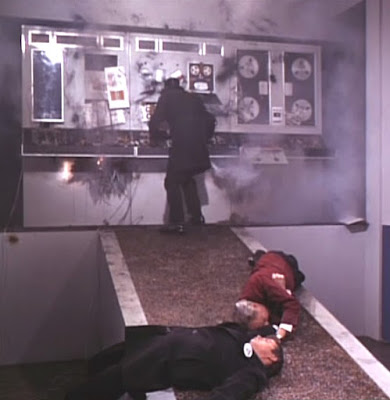 Symbolically speaking one could say creation out of destruction, although that really is a little unkind on the Professor and Number 12. Destruction of the General and with it Speedlearn, means the citizens of The Village have the freedom to think and learn for themselves. And yet Speedlearn was not meant for the citizens of The Village, but the people in the outside world. After all Speedlearn was but an educational experiment, and the citizens nothing more than guinea pigs. What would a three year history course really mean to anyone living in The Village? It wouldn’t matter in the slightest, but you’d never think it, judging by the way that night the students celebrated the fruits of Speedlearn. They celebrated like it was Carnival or Mardi Gras! One might say they were intoxicated by education, drugged and conditioned more likely, most certainly they were being tricked. And so Number 6, with the aid of Number 12 of Administration came to the aid of the citizens and released them from their slavery. Creation out of destruction!

Be seeing you
Posted by David Stimpson at 14:22