The Prisoner tried escaping by land, that didn’t work out so well, all that happened was he had a nasty accident. Luckily an ambulance was quickly despatched and soon on the scene! 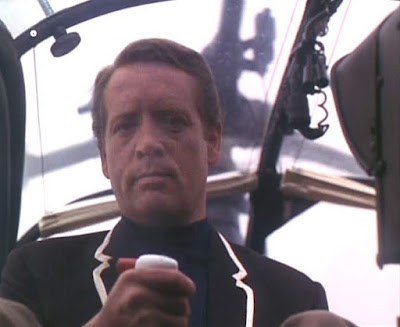 The next day Number 6 attempted to escape by air, but unfortunately for him he became unwittingly involved with a latest experiment, the development of a drone aircraft. A pilot-less helicopter flown by a technician in the Control Room! 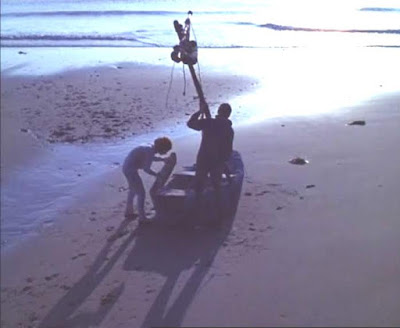 Then during ‘The Chimes of Big Ben’ Number 6 spent 6 weeks carving out a boat for himself and Nadia, because she claimed to know the location of The Village. And with such given information Number 6 could then calculate where he was sailing to! It was a 30 mile voyage to a cave on the Polish coast, or at least it was supposed to be. Because before he knew it he was crated up and on the back of a lorry on his way back to The Village!
He did try one further escape attempt by air, it was a golden opportunity, he was not the pilot on that occasion. However the plan failed due to the lack of basic information. The fact that Susan died a year ago!
Number 6 attempted two further sea-escapes, one was on the spur of the moment after he realized what they had been doing to him. The other was meticulously planned, he even had a number of reliable conspirators helping him, and yet both attempts failed. The last thing he tried before he gave up, was to attempt to get a message to the outside world, it didn’t matter who received the message, someone, anyone. The message was picked up, but presumably by the crew of M. S. Polotska, who returned the body back to The Village, and the contents of the dead man’s wallet to Number 2! Yes I realize ‘Dance of The Dead’ comes before ‘Checkmate’ in the screening order. But either way, Number 6 exhausted all the ways to escape by sea, well almost all. He never once tried to go inland by river, perhaps by dug-out canoe, after all The Village is set on the mouth of the estuary, of a river!