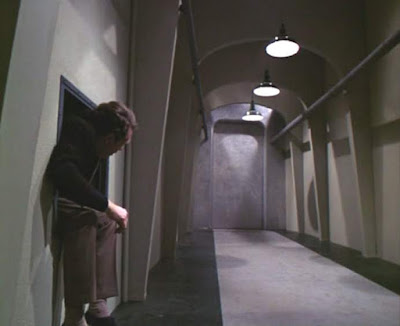 I trust that steel door at then end of the corridor would open for Number 6 from the inside, otherwise he’d have to climb out back up through that air vent!
Later in the episode when the way Number 6 walks down the passage, slapping his thigh with what Number 2 thinks is his letter of resignation, perhaps not with the same conviction as he does during the opening sequence, but certainly with determination!
Have you observed how Number 6 changes his socks during the scene from which the above image is taken? As he kicks out the grill of the air vent he’s wearing dark coloured socks, and after kicking out the grill he wearing beige coloured socks!
And Does Number 2 know that his office is involved in “time share?” Because when he’s out of the office it doubles up for Number 14’s laboratory, just like it will for The Village Gymnasium in ‘The Schizoid Man!’
Number 6 is very single-minded in the way his mind repeats over and over the action of him handing in his letter of resignation. Number 14 describes it as an anguish pattern, certainly Number 6 does appears to be in some mental distress, agonizing over the decision he took. Perhaps he regrets it.