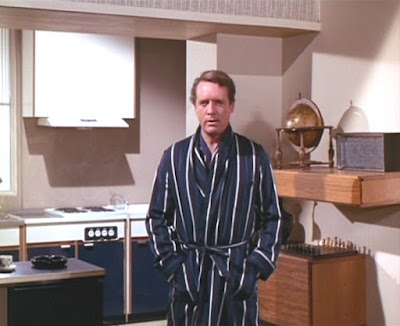 When in ‘It’s Your Funeral’ Number 50 {Monique} goes to ‘6 Private’ seeking help from Number 6. As she goes to wake him he pulls Number 50 onto his bed! He asked her how she got into his cottage. Apparently the door was unlocked, but then it always is to them! But Monique isn’t one of them! She’s come looking for help, to which Number 6’s advice is to go to the Town Hall, the Citizens Council promises help and advice to everyone. Just a minute, what’s that black ashtray doing there, that wasn’t there before, in fact its never been there. Also the two day-date calendars are no longer seen in the cottage. The one by the kitchen window, and the wooden one usually kept on the bedside table. What’s more Number 6 has taken to wearing his wristwatch in bed, rather than keep it on the bedside table, as he used to. As for the day date calendar, perhaps after the events of ‘The Schizoid Man’ Number 6 felt he could no longer trust what the date was, so he threw both calendars out! And the same with his wristwatch, it was too vulnerable sitting on the bedside table, so he took to wearing it on his wrist in bed. Thus making it more difficult for anyone to tamper with it during the night. That’s why Number 100 had to go to Number 6’s locker in the gymnasium in order to switch the wristwatch for an identical one. As he couldn’t go to ‘6 Private’ and swap the watches there!