It’s the 7th anniversary of THEPRIS6NER, and this evening my wife and I will be watching ‘Arrival.’ A man wakes up somewhere in the desert, and a tiny beetle scurries off. Who is this man, what’s he doing there, and how did he come to be out in that desert surrounded by the mountains? 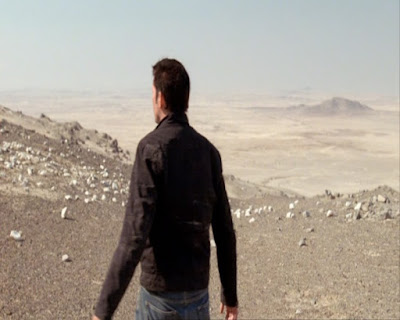 There are a couple of flashbacks or remembrances of this man in his apartment. Then suddenly the sound of gunfire! 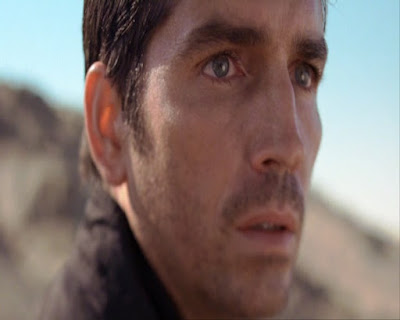 Then comes the sound of dogs barking, and figures in the distance. The man keeps himself hidden, out of sight, as he watches an old man scrambling down a slope as he is shot at by the pursuing Guardians. The man decides to help the pursued figure. He picks up the old man wearing a black piped blazer, and carries him, pursued by the sound of dogs, but there are no dogs, there are no pursuers! He finds a small cave and drags the body of the old man inside. Another remembrance of his apartment, and the look of panic in the man’s face. Beyond the cave only the desert for hundreds of miles in all directions.
In the cave the old man regains consciousness.
The man “Why are they after you? Has something happened to me? How?”
The old man “Listen to me. Tell them all I got out.”
“Something happened to me. I was in New York.”
“Go to five five four.”
“Five five four what?”
“Tell her.”
“Tell her where I am.”
“You’re, you’re not from here?”
“I don’t even know how I got to this place.”
“You…are…a…bloody…miracle……..be seeing you.”
The old man, 93, died, and the Prisoner buried him under a dead tree. Then set out across the desert, walking for miles and miles under the hot scorching sun until he came to The Village!
There are taxis, not the Mini-Moke, but the Renault Dauphine. There are no railroad stations, the taxi driver 147 doesn’t even seem to know what a railroad is. He’s asked to take the man to the nearest town, but it’s a local taxi service, that does local destinations.
So where is this place
“The Village.”
“Yeah, but what village?”
“Hey man, what gives with you? This is The Village, and I do local destinations.”
The Prisoner goes into a bar, the “Go-Inside” bar where he meets with 313, he asks her why is he in this place? He’s in The Village, where else would he be? Then suddenly a guardian with a dog, he sees it, but not 313, that’s because there is no guardian or dog!
Another taxi ride, and the Prisoner finds 554, a waitress at the Solar Café, where you can get anything to eat, just as long as it’s served in a wrap!
Again the Prisoner is pursued by guardians with dogs into a derelict building which turns out to be a run-down cinema. In order to escape, the Prisoner smashes a window and climbs out onto a ledge. Then a dark shadow appears, its tossing a hand grenade in the air. The Prisoner falls to the ground, Two tells him to get up and walk, but the Prisoner cannot get to his feet. The Prisoner wants to know how long he’s been there. Two tells the Prisoner that he knows he is Six. The Prisoner pleads that he’s nobody, that he doesn’t know anything. But he does, he is Six, he is Village! the truth is right inside Six.
The Prisoner ends up in the hospital where the doctor 313 is taking care of him. Eventually the Prisoner is released from hospital and is taken to see Two.
“Look” says Two “see how the sun makes it all glow.......the kind of day that makes you glad to be alive!”
The Prisoner wants to know why Two is keeping him there. But Two sees no locked doors.
They were after him, the Prisoner tells Two, it sounds terribly ominous. Why is the Prisoner there? It’s nothing to do with him, any of this.
But what was Six doing in the mountains? He was lost, he has no idea how he got there…..what did Two call him? Listen, something’s wrong here! Yes you are wrong Six. But don’t call him that. He’s not Six! But he has identification appertaining to Six, he is Six. Two wants to know what Six has done with 93, the old man, Six was seen out in the desert with him. But all Six wants is to get back to New York. But that’s not possible, there is no New York, there is only The Village!
And so it begins, a man confused in a Village from which there is no escape for the Prisoner!

Breathe in…breathe out…Village life goes on!
Be seeing you
Posted by David Stimpson at 08:22