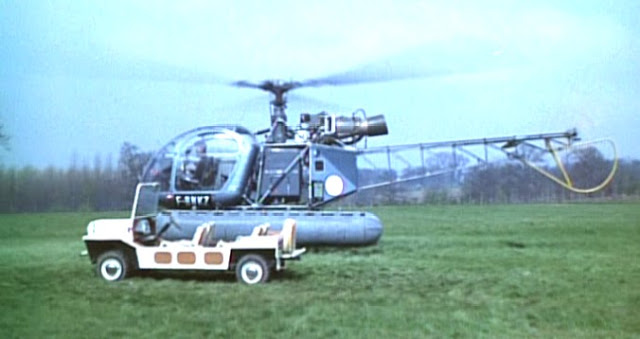 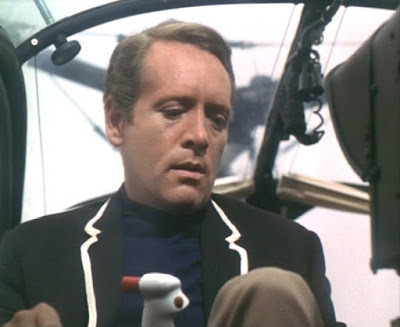 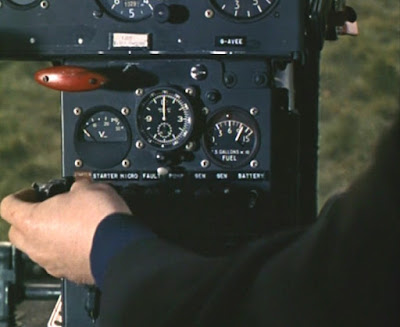 In the original script of ‘Many Happy Returns, having driven out to the hospital, breaking in to find the building as deserted as The Village, he ran back to the Mini-Moke. He then drove out into the countryside and gazed out over the mountains, and seeing that there was no escape in that direction, Number 6 was astonished to see a helicopter standing in a field. He drove the Mini-Moke across the field, and climbed aboard the helicopter. As luck would have it, the key had been left in the ignition {just as it had been with the Mini-Moke} he checked the fuel gauge. Turning the ignition key the engine fired into life and slowly the rotor blades began to turn. But then the engine stopped, and the rotor blades slowly stopped turning, as though the battery had died.
Number 6 climbed out of the helicopter, and connected wires to both the battery of the Mini-Moke and that of the helicopter. Then he started the engine of the Mini-Moke and revved it, and kept the revs up by placing a rock on the accelerator pedal. Climbing aboard the helicopter again he turned the ignition key and the helicopters engine fired into life, the rotor blades began to turn, then the engine faltered a little and then picked up again, the rotor blades fully turning, the helicopter finally lifting off the ground. But about a foot off the ground the engine coughed, spluttered, and died, the helicopter came to rest on the ground again. Number 6 tapped the fuel gauge with his knuckle, he watched the needle swing back to zero. It was with disappointment that he climbed out of the helicopter, removed the wire from the battery, and drove back into The Village.
That would have been far too easy an escape for Number 6. Mind you, had he been able to escape in the helicopter it might have been just as interesting an adventure. The Alouette II has a flying range of some 448 miles, but depending on how much fuel had been left in the tank, perhaps enough for a short journey, before Number 6 would be forced to land in……well possibly in the middle of nowhere. Even with a full fuel tank, there is no-way Number 6 could have flown all the way back to England. Although he could have made it to RAF Gibraltar, which was much closer! But let us not forget, it would have been the same for Number 6 aboard the helicopter, as it was aboard his raft, he didn’t know where he was sailing from, let alone where he was sailing too. But aboard the helicopter the journey would have at least been safer. Perhaps Number 2 had taken that into consideration, and that’s why the fuel tank of the helicopter was left virtually empty!