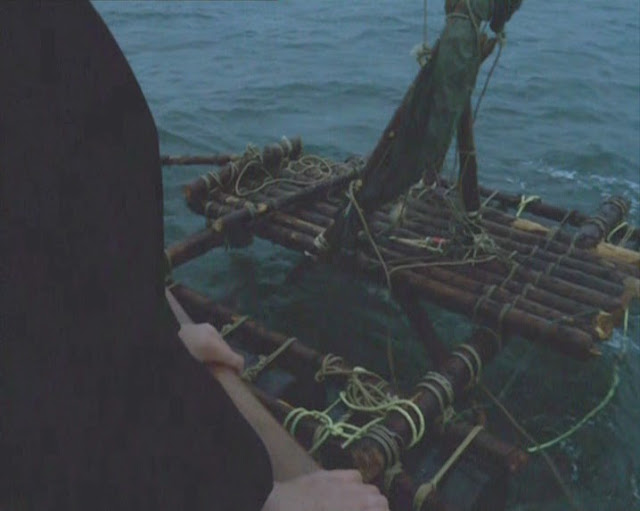 Now there’s a curious thing! I wonder why the “gun runners” took the time to strip the raft? You see Ernst hand up one of the three boxes wrapped in polythene {whatever they contained} to Gunter aboard the motor cruiser, which is suggestive that all the rest followed. The three crates, the galvanised bucket, and two small barrels presumably containing drinking water. Why the two “gun runners” should take the time to strip the raft bare, and take everything aboard their vessel is something of a mystery. It must have been obvious that there was nothing of any value there. And yet after getting underway again, Ernst and Gunter are then seen to eat out of tins of Village Food. This suggests two things. Either the tins of Village Food are their own, making them agents working for The Village aboard the M.S. Polotska, or they really are gun runners short on vitals having taken the provisions from the raft! However Ernst and Gunter did leave one item behind on the raft, the homemade compass!
Just one other thing, when Number 6 collapsed unconscious aboard his raft, the sail is set. And yet when Gunter boards the raft the sail is folded. The most logical answer is, that Ernst folded up the sail, seeing that two mooring lines had already been attached to the raft, before he began to strip the raft of Number 6’s belongings.