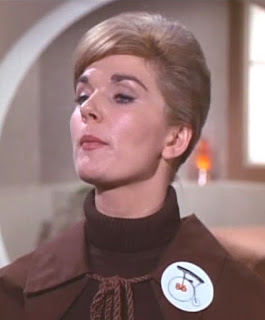 I say, you’re not wearing your cape inside out are you? “I wasn’t aware I was supposed to!” Well Number 240 wore her cape inside out. “I don’t think I know Number Two-forty.” No, but I’ve no doubt she knows you. “What do you mean by that?” Never mind, but she did wear her cape inside out, so did the Butler. Perhaps they didn’t want to look silly, especially the Butler, I hardly think a colourful striped cape would suit a man in his position. It certainly wouldn’t have gone with his bowler hat and black tails! But you carry it off very well I have to say. “Thank you very much.” Don’t mention it.
So there you were wearing Village attire, and then suddenly you changed into a blue dress, yes I know it was more feminine than slacks, but that’s not the point. By doing that you demonstrated an act of individuality, you could have been posted as being disharmonious for that, but you weren’t, perhaps because you were in league with Number 2. You were a confident woman, clever, but not quite clever enough. You let Number 6 turn the tables on you, its no wonder Number 2 called you a stupid woman! More than that, in your sedated state of mind, you allowed yourself to be hypnotised by Number 6, and spilled the beans to him. And then you went and denounced Number 2 as being unmutual! Mind you, you said that you once suffered the shame of being posted as disharmonious, that must have been terrible for you. But thankfully the Social Group was enough for you to see the errors of your ways, your not having been posted as unmutual, and forced to make a public confession like some.