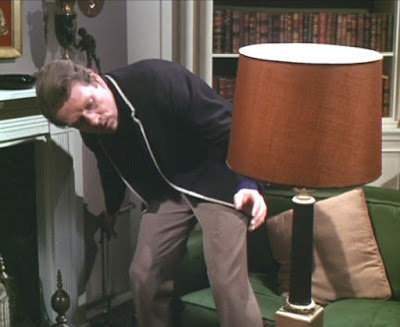 The other evening I went to turn the lamp on, and it short circuited, the light blew and so did the 3amp fuse. My wife said do I feel like I’m left-handed, funnily enough I said I didn’t!
Number 6 is left-handed, and having earthed himself to the gas pipe, he’s about to grasp that short-circuiting table lamp, in order to give himself an electric shock, thereby reversing the conditioning by electricity, and returning his right-handedness. Are we really to believe that would have happened? In all probability it wouldn’t, and Number 6 should still have been left-handed. But the script called for a quick return of Number 6 from being left-handed to right-handed. And really there was no other way of achieving that, other than via the short-circuiting table lamp, which was handy for Number 6!