A Favourite scene In Arrival 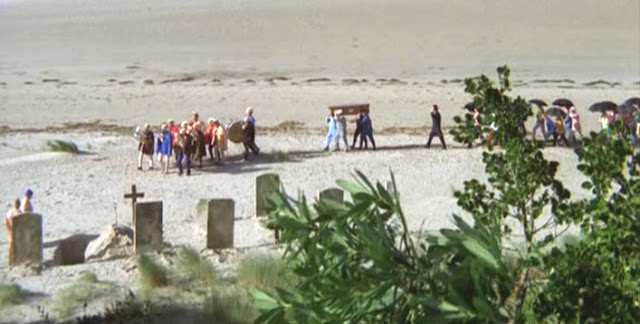 There is always something happening in the background to ‘the Prisoner.’ Take Cobb’s funeral in ‘Arrival’ for example; the cortege makes its way through The Village, along the sea wall and down onto the beach to the cemetery below the lighthouse and cliffs. Number 9 who followed the cortege at a discreet distance stands watching from the top of the cliffs.
Number 6 is also present “Friend of yours, you knew him?”
Number 9 “No.”
“You’re crying.”
“Funerals make me emotional.”
“Even of those people you don’t know?”
“Yes.”
“I knew Cobb, I’d like to help.”
“He’s dead!”
“He was a friend of mine, we met some time ago” Number 6 tells her
“How do I know I can trust you?” Number 9 asks.
“Can I trust you?”
“You know how he died?”
“He jumped from a window….. sorry Had you known him long?”
“No, just a short while.”
“Where did you meet, here?”
“Yes, yes.”
“Cobb was a good man.”
“Get back quickly” Number 9 tells him as a bell in the nearby lighthouse tolls.
“When can we talk again?” Number 6 asks desperately.
“We’d better not” she tells him.
“We must” he insists.
“Twelve o’clock at the concert!” Number 9 tells him.
Now all through this interview the funeral has been taking place on the beach just below the cliff and a coffin is actually placed into the open grave which is then back filled by two grave diggers. I had not really paid this any real close attention, because it was something happening in the background of the scene as my attention has always been focused on Number 6 and Number 9. And the man dressed all in black, including top hat? He’s an official from administration, who probably doubles up as an undertaker, and there are no colourful umbrellas, these are replaced by black umbrellas. And no mournful music is played at Cobb’s funeral, the Brass Band plays Johann Strauss Jnr’s Radetzky March to see Cobb to his resting place. It appears The Village enjoys its ceremony, but it seems they have made something of a spectacle of Cobb’s funeral {especially when you consider there’s no body in the coffin} as the cortege parades through The Village, on Number 2’s orders no doubt. Because how else is he to bring Number’s 9 and 6 together if not at Cobb’s funeral?