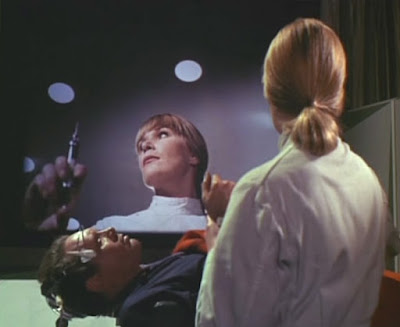 You really should have told Number 2 you know, why didn’t you? The fact that Number 6 opened his eyes for a moment and saw you, your image projected onto the wall screen, and you didn’t inform Number 2 of this. What was it, the way Number 2 threatened to have the drug tested on you, if you failed to use it on Number 6? You are just like the rest, well not quite like all the rest, you have a conscience. You didn’t want your wonder drug proved on Number 6, before it had had a chance of being tested on animals first. I’d like to see you get into the dreams of a rat, or guinea pig! But your drug did work, you were able to get into Number 6’s subconscious, and even to manipulate his dream. You put him at one of Engadine’s celebrated parties in Paris. You engineered three meetings, put words into ‘B’s mouth. That’s called “inception!”
Number 2 said your drug failed, but Number 6 succeeded, and you were pleased about that. Was it by chance that Number 6 was able to follow you from your cottage, through The Village, through the woods to the laboratory unobserved by you? Did you know you were being followed? If I didn’t know better, I’d say you used Number 6 against Number 2 from the moment Number 6 opened his eyes and saw you projecting your image on the wall screen. That’s why you didn’t inform Number 2, why you were so pleased that Number 6 succeeded.
What happened to Number 14 after the events of ‘A B and C’ is anyone’s guess. It might be supposed that she was permitted to leave The Village, or continued to work on behind the scenes at the hospital, carrying on with her experiments seeing as her drug works. Or perhaps she paid the price for her betrayal of Number 2. In any case, at some point the number 14 becomes vacant, as the next number 14 is a chess playing ex-Count.