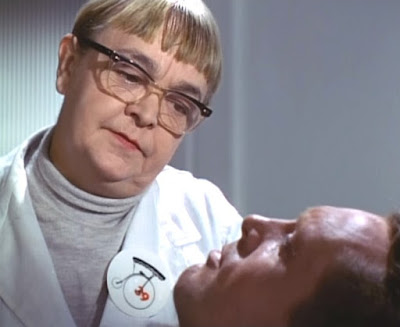 We’ve seen you before, but I doubt Number 6 would remember the occasion. You were in Number 6’s cottage assisting , when the doctor-Number 40 was conducting another experiment with Number 6 in an attempt to extract information, by using Number 42 as a communication medium. Now you’re conducting word association tests with Number 6. So you work in the psychologist department, or perhaps you are called upon when any number of different tasks come along. And you’re working under a different doctor, Number 23, and yet she’s nothing more than the female equivalent of the male doctor Number 40. I wonder what happened to him? Over stepped the mark once too many times did he? Perhaps it’s not always desirable to be the boss, but to be one of the minions, and an underling. At least that way you survive, after all after Number 2, it’s the doctors who have the biggest turnover in personnel. Even Number 1’s position might not be that secure!
I see from your results that you are getting some strange associations, from Number 6, the Hope And Anchor public house he knows from his school days. And free for all must still rancour with him after what happened. Anyway I’ll leave you to gaze lovingly into Number 6’s eyes. That’s the one thing that seems to be lacking in Number 6’s life, the love of a good woman. Number 8 is under the impression that she is that woman. Manufactured love, there’s nothing quite like it!