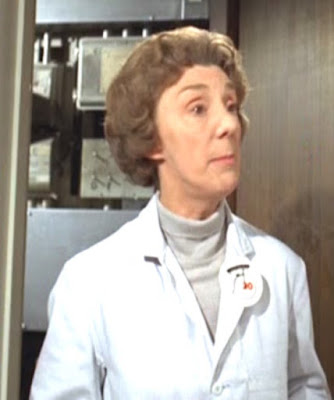 This is apparently Number 30 who emerges from a side office into a corridor and encounters Number 6 masquerading as Number 116, by putting on a white coat, and a pair of spectacles. The spectacles I suspect were Patrick McGoohan’s own, otherwise he might not have been able to see through the lenses. Also the numbered badge he wears incorporates the digit 6, but that’s probably merely a coincidence.
The medic who emerges from a side office, in reality an electrical switch gear room, is Number 30. In making sure of the identification of the number, I magnified to such an extent, that the number looked once upon a time to have been the number 10. Under the digit 3 is a strong vertical line which looks like a red1!