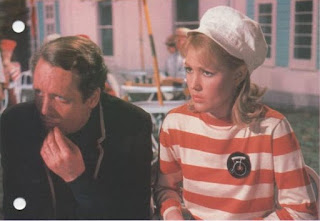 It all began with a postcard, that’s the one on the right here. It was sent to Morag and I from Dave Barrie, soon after the 1996 Prisoner Convention at Portmeirion. We had asked Dave to play the role Number 2 who was about to retire in a re-enactment of the Appreciation Day ceremony. I remember how tickled Dave was to do this, so much so in fact that he wore the Great Seal of Office all that 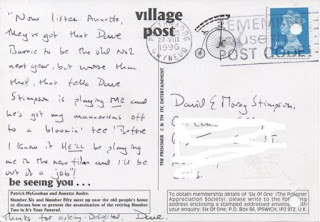 weekend, and was interviewed whilst wearing it.
The film to which Dave Barrie refers to on the postcard was the supposed up and coming feature film of ‘the Prisoner,’ which as we all know never materialized. However within two years of this postcard a film inspired by ‘the Prisoner would go into production, that film was ‘Village Day,’ although when Dave Barrie put to me his proposal for producing a Prisoner film, there was no idea of what content the film would take. That would not come until much later. Certainly Dave Barrie had been impressed by my playing the role of Number 6, and I was really honoured that he should want to make a film with me in that role. And really that is all I was expecting to do. To be given a script once it had been written, and then act the role of Number 6. I had no aspirations of working behind the camera. But that’s not how it was to work out. Dave and I had spoken to Frank Ratcliffe, a representative of Polygram at the time, who gave us the go-ahead to produce a film. However there were certain criteria to be met. 1, the film does not in any way detract from the quality of the original series or from Polygram’s own position. 2, the film is made for and by the members of Six of One. That no professional outside agency, or individual is to be employed in the production of the film. 3, Permission is sought from Polygram before offering the resultant film for sale and that it is not offered outside the society of Six of One. 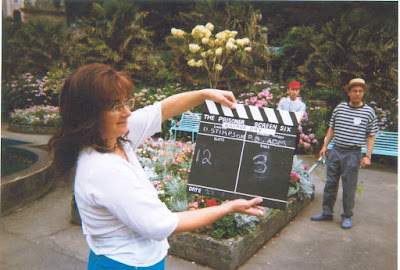 An announcement had been made at the 1997 January Work-In {when members of Six of One used to gather at an event to put the societies quarterly mailings together} announcing the intention to make a society feature film based on ‘the Prisoner.’ This was accompanied by an announcement about the film project in issue 13 of ‘In the Village’ Six of One’s
society magazine. And eventually I was inundated with applicants, and ended up with between 60 and 70 names on SCREEN SIX’s books. But of course that number eventually dwindled down to about 20, as people’s enthusiasm to work on the project waned. A second notice was placed in issue 15 of in the society magazine, containing a brief update on the project at that time.
Dave Barrie had the idea that the film should be produced by committee to oversee all aspects of the films production, and eventually a committee of ten people was formed. However that idea was soon ditched by Dave after he told scriptwriter Roger Parkes at the 1997 Prisoner Convention what we were going to do. Parkes said to Dave that he’d never get anything done if he attempted to produce a film by committee. Soon after that Dave Barrie dropped the idea of the committee. Unfortunately a committee of ten people had already been formed, and there had already been two meetings of that committee! Dave Barrie then left the project even before a decision on the script had been made in order to help Ian Rakoff with his book ‘Inside the Prisoner.’ Later when casting of the film was taking place, I was happy to offer Dave a role in the film, and delighted when he accepted that role. 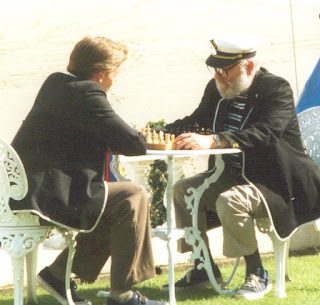 As for the committee, it was soon apparent to both Morag and I that it had to be disbanded, because it was impossible to get anything done without first contacting 8 other people. One person had to be the boss in order to oversee, and be responsible for the films production. I decided to take on the position myself, as Executive Producer.
That was all of 19 years ago now, and although ‘the Prisoner’ sees its 50th anniversary production, I cannot help but think that ‘the Prisoner - Village Day’ is approaching its 20th anniversary. In fact ‘Village Day’ was the last Prisoner inspired film to be filmed at Portmeirion before all the railings were erected around The Village. So on that basis the film also contains archive footage of Portmeirion before the changes were brought about.
Although the film was originally produced for Six of One it never received official society funding, having been told by the Co-ordinator that there insufficient funds for such a project. So I relied upon donations from members of the society, at the same time putting my own money into the film. Years after ‘Village Day’ became less known as a Six of One film, and more my own personal production as an arthouse film under SCREEN SIX Productions. 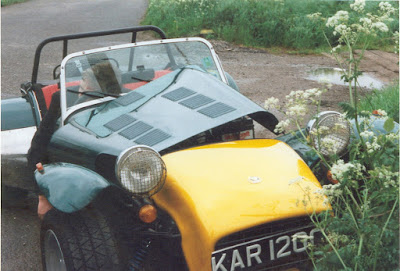 The film has never been screened at any Prisoner Convention, but has been enjoyed at private screenings, and has been highly merited for its content, if not for its production quality!

Be seeing you
Posted by David Stimpson at 07:38