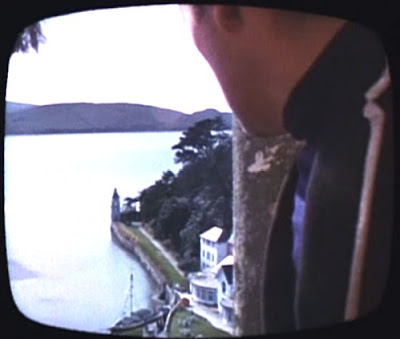 In ‘It’s Your Funeral’ a daily activity prognosis report on Number 6 is carried out, and during that report Number 6 daily climbs the Bell Tower, the subject is seen as eccentric, he’s constantly watching, waiting, or that he simply likes the view. But Number 6 never does anything without good reason. He might well be motivated to climb the Bell Tower because of what happened down on the beach that evening during ‘Dance of the Dead,’ when Number 2 caught Number 6 looking out to see. He was looking for a light, a boat, a plane, somebody who belongs to his world. So it seems reasonable that Number 6 still maintains that look out, but now from the highest point in The Village, the Bell Tower.
Just one other thing, the statue has been removed since the Prisoner first climbed the Bell Tower on the day of his arrival in The Village. It makes one wonder why the statue was carried up the tower in the first place. If for some reason it was for the Prisoner’s benefit, it was a lot of trouble to go to haul a heavy statue to the top of the Bell tower, only later to have to remove it.
If Number 6 is looking for someone from his world, a light for example, perhaps he should climb the Bell Tower at night, then he might see a light in a window of the house on the other side of the estuary! Unless the house is an outpost of The Village!

Be seeing you
Posted by David Stimpson at 13:08