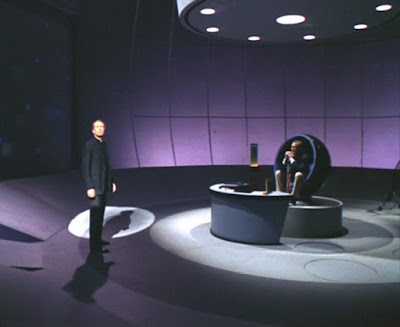 The moment the Prisoner steps into Number 2’s impressive office he’s put straight under the spotlight! Is there a purpose to this, does it aid Number 2 in dealing with the new arrival? Is it some kind of interrogation technique? Perhaps the spotlight has no purpose, except for dramatic effect in highlighting the subject. On stage the spotlight, sometimes known as the followspot, operated by a spotlight operator {obvious really} uses the light to track actors around the stage. So it would seem that although ‘the Prisoner’ was being filmed for television, a stage effect was being used on this set. As the Prisoner walks around the chamber the spotlight is kept on him all the time. Perhaps it’s simply because Patrick McGoohan is the chief antagonist in this scene, and so the spotlight is kept on him.