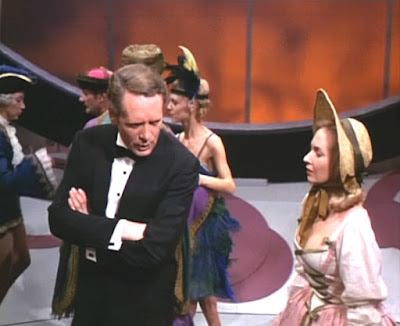 “How many of these have you been to? This is my first and last” Number 6 told his Observer, or rather Little Bo-Peep!
There he is, Number 6 as himself, at the Ball. He’s supposed to be dancing with Number 240, in fact the Supervisor as the Queen of Sheba tells Number 240 “Don’t stop dance.” But straight away Number 6 folds his arms, and in so doing instantly puts up a barrier between himself and Little Bo-Peep, as well as keeping his distance from her. Number 240 does dance a little, a dance which seems  vaguely to have something to do with “The Twist!” While Number 6 just walks backwards for the most part, making no attempt to dance with the young woman, but he’s good at talking as he tries to pump 240 for information. It’s as though Number 6 cannot allow himself to enjoy himself for one minute. As little Bo-Peep, she is forced to dance alone, trying to dance “The Twist” in a long flowing dress!

Be seeing you
Posted by David Stimpson at 14:25