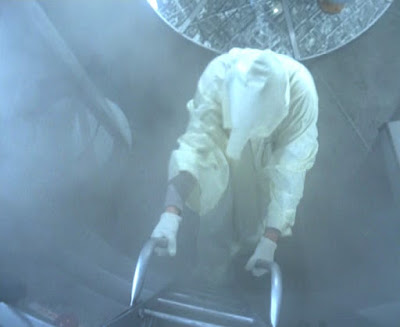 Have you observed how the criminal when pictured in films or in a television drama series, whenever he or she is being chased, has a sudden and compelling urge to climb upwards, and more often than not trapping themselves in the end? Well Number 1 is no different. Having been unmasked he is pursued within the confines of the Control Room of the rocket, and being desperate that Number 6 should not lay hands upon him, Number 1 sees the steel ladder and climbs up into the nose cone of the rocket so as to evade capture. But he has sealed his own fate, and has trapped himself. One would have felt Number 1 to have had more intelligence than that, seeing the origins of his genetic make-up. Nevertheless he allowed himself to be out witted by his other half. But let’s face it, Number 1 isn’t the first to have underestimated Number 6!