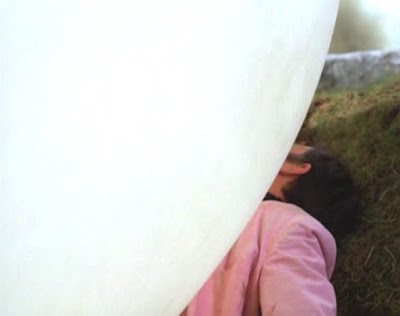 During the Appreciation Day ceremony there was a plot to assassinate/execute the retiring Number 2. It was the aim of Number 50, the watchmaker’s daughter, and Number 6, to stop her father from killing Number 2 by use of a bomb in the Great Seal of Office, to be detonated by radio remote control!
Number 51 had secreted himself at the highest vantage point in The Village, the Bell Tower. Having found him there, Number 6 relieves the old watchmaker of the detonator. On his way from the Bell Tower Number 6 is intercepted by Number 100, asking Number 6 to give him the detonator. Number 6 declines to do so, and tries to force his way passed Number 100. A vicious fight breaks out between the pair, as 100 attempts to gain control of the detonator, while Number 6 tries to force a confession out of his adversary. The fight ends with Number 100 being knocked unconscious by Number 6. But what I want to know is this, how and why did Number 100 come to be attacked, and smothered by Rover? After all Number 100 was acting on the authority of the interim Number 2. Might it be that the Guardian saw the fight, and decided that Number 100 was a danger to Number 6, and therefore Rover was protecting him, roughly in a similar way it attacked Curtis during that episode of ‘The Schizoid Man’ when Number 6 chased Curtis out into the night?
I suppose on a production level, it must be wondered, why the film editor felt the need to insert this few seconds of actor Mark Eden being smothered by The Village Guardian, during the scene in ‘Arrival’ as a Villager is being smothered by the Guardian, when they had a perfectly good subject in the first place, and why it wasn’t used in ‘It’s Your Funeral?
When actor Mark Eden was a special guest at the 1994 Prisoner Convention, I don’t recall anyone asking him about this scene.
It’s inexplicable as to why the film editor John S. Smith inserted the few seconds of film in which Number 100 in the scene in ‘Arrival,’ in which a young man is being smothered by the membranic Guardian. Especially when there was nothing wrong with using the original young man being suffocated in the first place!
However even the at the point of suffocation, it was neither the young man, nor Number 100 {Mark Eden} being smothered by the Guardians membrane. The young man who was chased down by Rover wears a hat and sunglasses, whereas the man being suffocated isn’t wearing neither hat or sunglasses! That’s because the man being suffocated is third assistant director Seamus Byrne, even when it’s Number 6 being suffocated by the Guardian!