60 Second Interview With No. 2 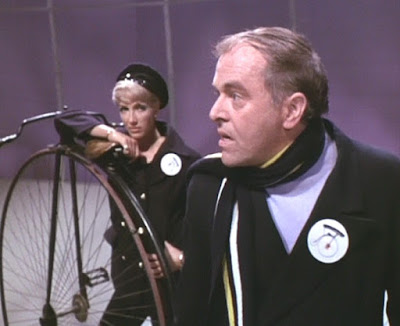 Number 113 “Sorry to disturb you Number Two.”
“What is it now?”
“I’d just like a quick word with you.”
“Well who are you?”
“I am Number One, one-three, and this is my photographic colleague Number On, one-three b.”
Number 113b “Smile” {click goes the camera}
“We contribute to The Tally Ho don’t you know.”
“No, I didn’t know.”
Number 10 “Tell him to sling his hook!”
“Don’t be like that.”
“Well what do you want?”
“It didn’t go very well did it?”
“What didn’t?”
“Whose idea was it in the first place?”
Number 10 “Don’t tell him. You don’t have to explain things to the likes of him!”
Number 113b “You know I could have you on page three of The Tally Ho, smile and get your kit off!” {click goes the camera}
“Don’t make promises you can’t keep!”
“What do you mean by that?”
“The Tally Ho doesn’t have a page three!”
Number 2 “By what I’ve seen of it, it doesn’t have a page two!”
“But it does  have an interesting advertisement in the bottom left-hand corner. For all your child-minding needs contact Number Six at Six Private,’ or telephone Number Six. Is that what gave you the idea?”
“Idea?”
“To try and get Number Six to open up to children.”
“Well it had never been tried before.”
“And by what I can tell it’ll never be tried again!”
Number 10 “Oh well it was worth a try Number Two.”
Number 113 “Of course it wasn’t worth a try. Scraping the bottom of the barrel I calls it!”
“Look what is it you want?”
“Well I like to get to know each Number 2, to get their story, to get beneath the skin so to speak.”
“Well I’ve had enough story for one day, and you’re certainly getting under my skin. Clear off!”
“That’s right Number Two, you tell them!”
“And you can shut up as well. I say, you’re not really going to appear on page three are you?”