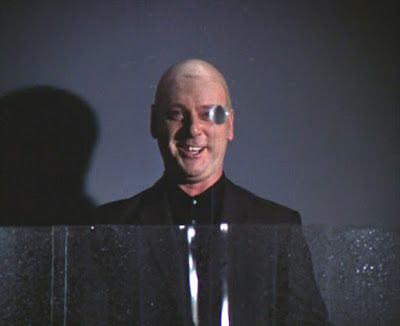 “Ah, he’s coming along nicely” the doctor told the Prisoner, but in what way is this man coming along nicely? He appears to be off his head, but happy with it. Is this the result of some bizarre treatment, but what treatment? A man sat behind a glass screen making some infantile sounds, with a spout of water and a table tennis ball balanced on the top. Might that not be symbolic of the membranic Guardian? And the man, he’s wearing the Prisoner’s suit of clothes, this seemingly infantile man, might he be some early attempt at making a clone of the Prisoner? His face clearly yet to be amended, and some stimulation in order to encourage hair growth would be a good idea. And the noises he is making the early attempts at speech. Perhaps that’s why the doctor is pleased with his progress, and why he’s dressed the way he is.