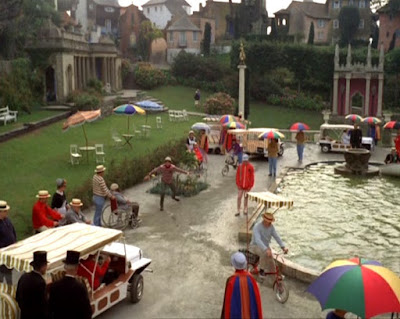 It would appear that the Piazza has been turned into one of those so called “shared spaces,” where traffic, cyclists and pedestrians share the same space. It looks rather unsafe to me, in particular for those people in wheelchairs. Look, there’s one chap in dark glasses and striped jersey dodging about, trying to avoid the traffic. If he’s not very much careful he’ll end up being run over! But thankfully this “shared space” is well policed, and a Guardian quickly moves in to subdue the pedestrian as he has not only become a danger to traffic, but also to himself!