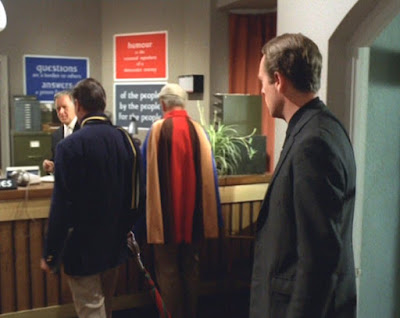 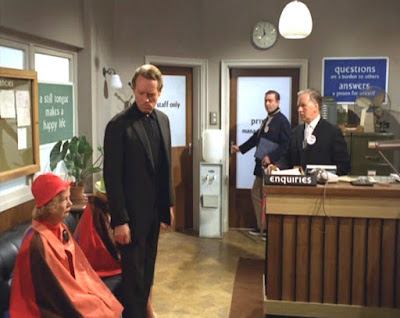 “Questions are a burden to others, answers a prison for oneself.” They are to those who have to keep asking the same question over and over again, “Why did he resign?” Because after 48 years Number 2 is still no closer to getting a complete answer than he was at the beginning! And the Prisoner doesn’t really want to say why he resigned, for fear of making a prison for himself. Because once he’s said the reason, then he cannot take it back!
“A still tongue makes a happy life,” well keep your mouth shut and you’ll be alright! No-one likes a fishwife going about The Village shouting her mouth off!
“Humour is the very essence of a democratic society,” Number 2 once said of Number 6 that he likes his sense of humour. And Number 6 once said of him “You have a delicate sense of humour,” It might well be imagined that a sense of humour would be needed in order to survive each day confined in The Village. Only there are times when The Village seems void of any such humour. Except when Number 6 said “I am not a number, I am a person,” the electorate found that hilarious. I suppose the man with the greatest sense of humour is Number 2 of ‘The Chimes of Bug Ben,’ ‘Once Upon A Time,’ and even during his trial and confinement in an orbit tube in ‘Fall Out’ he never once lost his sense of humour. He was always laughing at something or other. I know that each Number 2 laughs during the opening sequence to ‘the Prisoner,’ only that’s not because of anything humorous, but from something darker.
“Of the people, by the people, for the people,’ Number 6 could see that phrase takes on a new meaning in The Village. Although the use of this phrase in particular, demonstrates that The Village administration isn’t slow at adopting such phrases from a Gettysburg address, for its own use and interpretation. Except it’s pure propaganda, seeing as the people in The Village have very little say in anything.
And the Prisoner, well he’s hardly in the Labour Exchange for a job interview, only for an aptitude test and even that’s manipulated, and to fill in a questionnaire for the files of the Labour Exchange. But why is he appearing to be looking with suspicion at the seated lady? In any case the assistant behind the counter looks at the Prisoner with suspicion. What’s more that chap still has his job by the time of the election of ‘Free For All, unlike some!