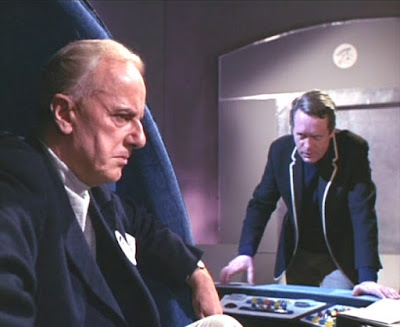 He just had to come back! If he’d stayed away the events of ‘It’s Your Funeral’ would have been avoided, and Patrick McGoohan would have had to look for another script to film! But no, Number 2 thought that seeing all the work he had carried out for good of The Village and its community at large, the least he deserved was a decent pension. However things being what they are, The Village pension fund was empty, even for a permanent Number 2 such as he.
So why did Number 2 return to The Village? Perhaps he had some work to finish. But certainly he came back of his own accord, yet being a realist he probably thought he had no other choice in the matter. That no matter where he went, they would find him eventually and bring him back to The Village. Well Number 6 should understand that, but then he made it easy for them!
Certainly Number 2 is in a tough spot, because although he has overseen a great deal of work for The Village, and now he sees it as a cause to die for, even though there’s no other way! Perhaps now he thinks that not having returned to The Village would have been the better part of valour. But he’s unique this Number 2, because I’m of the opinion that he is the permanent Number 2, and every predecessor has been an interim Number 2. Also he is the only Number 2 to be known to go away on leave. Normally an employee would be allowed two weeks holiday each year, but in this Number 2’s case, he seems to have been on leave more times than that. Unless of course he spent his leave in The Village. Or he carried out his work for The Village and the community in the background, leaving interim Number 2’s to deal with the matter of Number 6. Because there is something else unique about this Number 2, he doesn’t appear to recognise Number 6, and Number 6 certainly doesn’t recognise him!  So with his retirement the new Number 2, that blond haired, blue-eyed former interim Number 2 is now the new permanent Number 2. And yet his term of office was cut so short, as he looked to the skies to see the helicopter approaching The Village with his replacement, the new Number 2 on board!