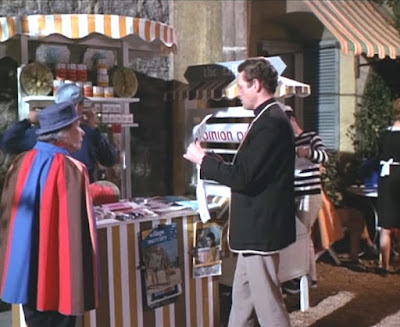 In ‘It’s Your Funeral’ when Number 6 goes to a kiosk in order to purchase a copy of The Tally Ho broadsheet, and a bar of soap. Number 36 is already at the kiosk trying to get served, she wants to buy some sweets. Number 36 has a sweet tooth, and so cannot go a day without her sweets. Originally it was supposed to have been cigarettes 36 couldn’t go a day without. I did once wonder whether or not Number 36’s addiction to sweets was part of some sort of medical treatment used against her. But unfortunately her week’s credit allowance has been all used up, and the kiosk holder tells her to come back tomorrow. I’ve never really understood what good it would do 36 to “Come back tomorrow” seeing as her week’s credit allowance has been all used up. Unless tomorrow is the first day of another week when 36 will have been issued with another credit card!
Number 6 is never one to ignore a damsel in distress, even one who treated him with such derision and contempt, as she looked down her nose at a man down on his luck the last time they met! Because fictionally speaking Number 36 could be Martha, Mrs. Butterworth’s house maid. She probably accompanied her mistress to the Village, and for a short time took the Butler’s place in serving Number 2. But unfortunately for Martha, when Mrs. Butterworth left The Village she didn’t take her housemaid with her! So Number 6 took pity on the woman recognising her for who she is, and even so bought a bag of candy for her!