It’s all a question of perception really. The words on a sign, a place on a map. All places could be the places of the mind. You are where you think you are, because that is where your senses tell you, you are. But what if you are nowhere near, that you are being manipulated into thinking you are where you think you are, but in fact you are in another place? That is what had happened to Six, along with everyone else who had been taken to The Village. And all the time they are living their lives in New York. But while in the Village that is where the people think they are, because that is where they think they are. The idea of The Village put into their deep subconscious minds, and so they are where they think themselves to be. The power of the mind. Two said it, it’s psychological. 313 is rather smitten with Six. But what she will never know is of course, is whether her feelings for Six are genuine or…….whether Two put those feelings of love for Six in her mind for her! 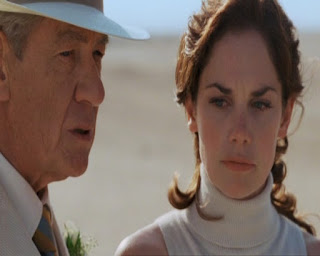 That’s THEPRIS6NER for you, it plays with the mind. The first series might be less of a psychological problem, but it has played with the mind these past 48 years, and in all probability, looks likely to go on for a good many years to come.
Psychologically, I used to think of The Village, to put it in my mind, which wasn’t that difficult, as there was a time when Portmeirion was hardly out of my mind. I would try to use my subconscious to try and will myself to The Village. I even wondered that if I were in a room in Portmeirion, and seeing as the outside in the late 1980’s had not changed that much from the 1960’s, and that if the décor of a room was not that different from then, and the 1960’s, perhaps I could will myself back to when ‘the Prisoner’ was being filmed in Portmeiron. Not physically, but in my subconscious mind. I once tried, I fixed my mind on ‘the Prisoner’ whilst staying in Portmeirion for the first time. But it didn’t work. There must have been something in Lower Trinity in the 1980’s which wasn’t there in the 1960’s, which stopped me. And then again, when I sat there one evening watching an episode of ‘the Prisoner’ on Portmeiron’s own video channel as the Prisoner was crossing the Piazza. Then I looked out of the window, it seemed almost as though I would be able to see him physically doing this. It was an uncanny feeling at the time.

Breathe in….Breathe out…more Village.
Be seeing you
Posted by David Stimpson at 07:48