The 49th Anniversary of Filming At Portmeirion 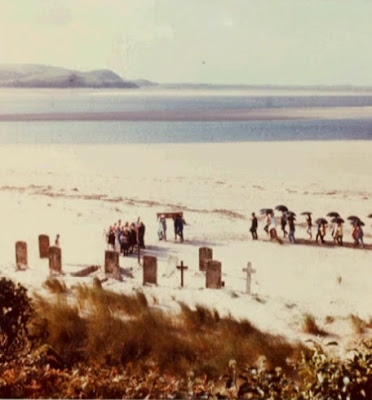 Although a substantial amount of the opening sequence to ‘the Prisoner’ was filmed on Sunday August 28th 1966, it was on September 5th 1966 that filming on location at Portmeirion commenced. The location filming was for ‘The Arrival,’ ‘Free For All,’ ‘Dance of The Dead,’ and ‘Checkmate.’ Further film work at Portmeirion took place in March 1967.
The according to the planned schedule, filming was to commence with the Graveyard scenes, which was relocated to Treath Beach. However rain plagued the shoot for that scene, and the film crew had take refuge in some nearby caves. The coffin was looked to be far too light after the first couple of shots. So to make the coffin heavier, rocks were placed inside it. It wasn’t until the 5th that the weather finally cleared, and for the rest of the month Portmeirion was bathed in sunshine, which was fortunate for Patrick McGoohan and his film crew.
Tonight my wife and I shall be watching ‘The Arrival’ to celebrate this anniversary. We might have watched ‘Checkmate,’ only that was screened not so very long ago. ‘Free For All’ or ‘Dance of the Dead’ might have been two further choices, only ‘The Arrival’ happens to be my favourite episode in the series. I call it ‘The Arrival’ as that was the original title of the episode, and I have to say that I much prefer it to simply ‘Arrival.’ ‘The Arrival,’ after all it was the beginning of the Prisoner’s life in The Village, it was a big day for him, and for Number 2 in his dealings with the Prisoner. Not only to de-brief him, but also to brief him on The Village. He knew how important the Prisoner is, that the situation with him had to be handled very differently. Which means Number 6 is no ordinary prisoner. Number 2 even suggested the possibility that he might be given a position of authority. One might beg to wonder if that was correct, to ask if Number 2 had not exceeded his authority by doing so. And yet, in a way, Number 6 did achieve a position of authority in ‘Free For All.’ although as it turned out, it was only one of Number 2’s ploys.
In those first four episodes, the Prisoner attempted to escape the confines of The Village on no less than 4 occasions, which is half the entire number of attempts and that’s including his escape in ‘Fall Out.’ Only 8 attempts, doesn’t seem that many. But then it only takes one escape plan to be successful, but I’m wondering just how successful that escape in ‘Fall Out’ really was, judging by the final shot being the beginning of ‘The Arrival!”