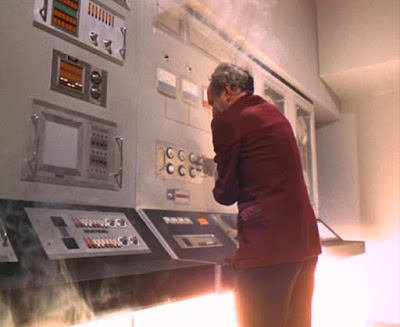 In ‘The General,’ after Number 6’s insoluble question of WHY? is fed into the General. Unable to answer the question due to insufficient basic facts, the computer blows a circuit. In fact it blows several circuits. And as smoke issues from its vents the Professor desperately tries to shut the General down, but is electrocuted for his pains. Number 2 dashes forward, but stops half way up the ramp. Number 6 takes on the two security guards, and Number 12 rushes forward in a brave act to try and save the Professor’s life. But the Professor is conductive, and both suffer the same death by electrocution. As for Number 2, he eventually moves forward, looking for the Number 6’s question in the ruins of the General. He demands Number 6 tell him what the question was. Never mind the two dead men lying at his feet. Never mind what fate may be in store for him, at this precise moment he’s having difficulty in coming to terms with how easily Number 6 destroyed the General, having acted upon the Professor’s instructions, that the General must be destroyed!
As for the Professor, why should he attempt to save the General? After all he saw the only way of stopping the abominable Speedlearn, to set the people free from its slavery, was to destroy the General. Perhaps as having given birth to the General, it was difficult to see his brainchild destroyed, despite his hatred for it. As for Number 12, I’ve never been able to make up my mind whether he was attempting to save the Professor’s life, or had committed an act of suicide. After all had Number 12 lived, he would almost certainly have been dealt with harshly by Number 2, who had already suspected him of being a traitor. In having worked in collusion with Number 6!