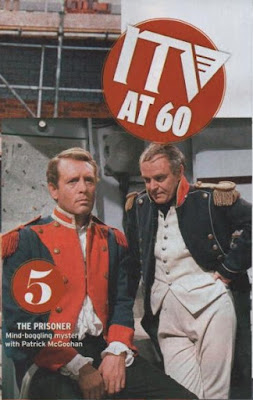 The results are out! A poll was taken to find ITV’s greatest show to celebrate 60 years. That greatest show was voted ‘Auf Wiedersehen Pet, about a group of Geordies from Newcastle, working on a building site in Germany. You might be surprised, as indeed I was, that ‘the Prisoner’ came in fifth in the poll. I think this is the highest rating the series has received in any poll taken about television series.
However this poll was taken out by the Radio Times, nothing unusual in that I hear you say, well it is when you consider that the Radio Times was originally for BBC radio, and then with the advent of television the programme guide encompassed television as well. Then came ITV and ITV had its own television guide call the TV Times. And for decades never the Radio Times and TV Times should meet. What I mean is, it was a rule that the two magazines never advertised each other’s television programmes, a rule which has been broken in recent years. However, my first reaction to this poll of ITV’S greatest television programmes, is that it was being undertaken by the Radio Times, when it should have been the TV Times. After all it is 60 years of ITV the poll was celebrating. What’s more why use a picture from ‘The Girl Who Was Death?’ Yes it is from an episode of ‘the Prisoner,’ but it doesn’t optimise ‘the Prisoner.’ Why didn’t they use a picture from ‘Arrival,’ Free For All,’ or ‘Checkmate?’
And finally, I know that there are a large number of enthusiasts here in Britain who are wanting a screening of ‘the Prisoner’ on ITV in order to celebrate its fiftieth anniversary, and what I am about to write they will find harsh and will disagree with it. However if ITV couldn’t commission its own magazine to conduct a poll of their greatest television programmes, and is unable to celebrate itself with either an evening screening of vintage television programmes, or even a short series, what chance does a screening of ‘the Prisoner’ have? None that I can see!